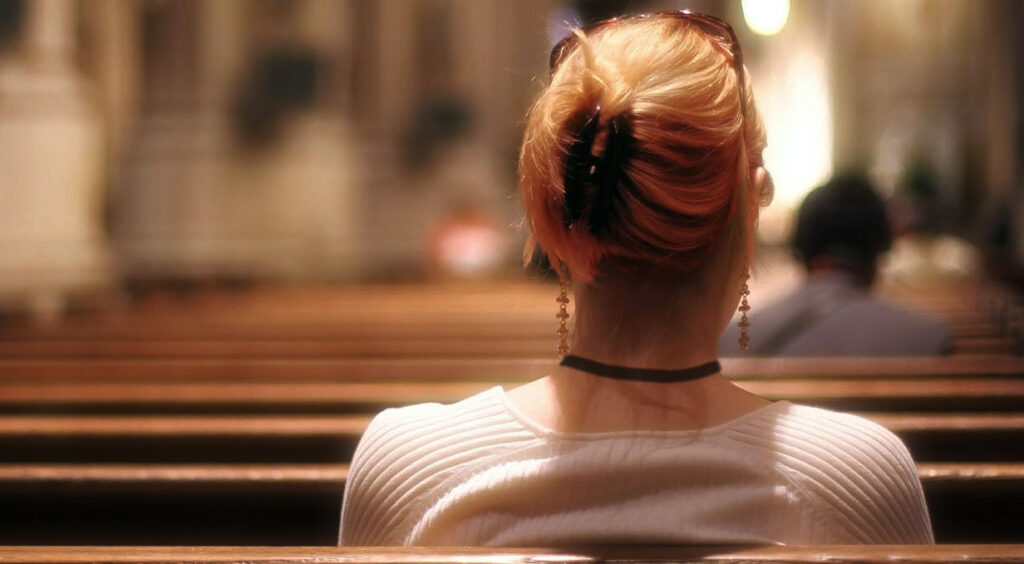 SOUTH LAKE COUNTY- After attending services there two times, Ron and Stacy Laywright of Palmer Indiana are almost certain that the Ashbay Church, located in a remote portion of Unincorporated Leroy County, is home to a religious cult.

“We’re always interested in exploring fellowship with faith communities in the area and hearing about the ways other people are spreading the Gospel through good works and worship.” Stacy Laywright told us when we interviewed her about their suspicions. “We’ve been to churches all over the area and we have friends who are members from many local churches. If anything, Ron and I think that there’s always room to learn about the ways we can be better Christians, even if it's just seeing that some churches focus on some teachings and others have a different mission. I found a flyer for Ashbay Church under my windshield wiper after work one day and I thought I’d see what they were about on Facebook.”

“With any community you’re going to have fashion trends, things come and go. One season everyone’s wearing housecoats, the next everyone’s got to have chunky bracelets." -Stacy Laywright

“Stacy showed me a few of their videos on Instagram last month and I thought it could be a nice change of pace.” Ron Laywright told us at the home he and Stacy have owned since 2017. “We’d been making the rounds at a lot of the same services in the area for the past few years, then we were all on zoom for a while, but I’m always interested in meeting new people and seeing if there might be exciting work being done in a church we haven’t been to. Nobody I knew had ever mentioned (Ashbay Church) and it seemed like the band from the video of their services was very talented. One sermon I saw on their YouTube channel really seemed to speak to issues I was struggling with, you know just making it to the gym regularly and better care of myself. We decided to check it out and make the drive.”

“Ron and Stacy are really spiritual people, and their faith is a big part of their lives.” Ron’s brother Terry told us. “I wasn’t surprised when he told me they were going to go to a church way out in the sticks because they’re always visiting new churches. They listen talks about faith on the radio, they watch services on YouTube.  But when he told me someone from the church called them before they even got home, I thought that was odd. I think he knew it was weird too because why else would he tell me about it?”

“I didn’t want to say anything about it to Stacy, because you know women don’t like to hear about their husbands noticing this kind of thing,” -Aaron "Ron" Laywright

“I didn’t think anything was odd about Erica from the Welcoming Board reaching out to us on our way home at all,” Stacy told us when we asked about Terry’s story. “Everyone in a church community has to find their calling and Erica seems like she’s really blessed with the gift of hospitality. It can be difficult to be the new person in a worship community and that’s when it’s a calling to help welcome people and make them feel like they belong. I was thanking her for calling when she interrupted mer to say we should take the next exit and grab a pie from the market two stop signs down… I hadn’t said anything about where we were or even what road we were on.

“Stacy didn’t give anyone our phone number.” Ron pointed out. “This Erica woman calls and asks her if her husband Aaron would be interested in coming to the Ashbay Men’s Ministry Trout Fishing expedition that Saturday. At first, I thought ‘wow that’s awesome, trout season just started and I’m expecting some new gear I ordered from Amazon to arrive tomorrow.’  Then I wondered how she had known my name was Aaron. Everyone calls me Ron and nobody’s ever thought it wasn’t short for Ronald.”

Even before these events caused the Laywrights to rethink their decision to attend services at the Leroy County church, they report that some of the things they noticed about the group had given them pause.

“They seemed really focused on the importance of having children,” said Stacy Laywright. “I mean most churches stress the importance of family, but I expect that to come in the form of talk about how great it is to be a mom, emphasis on how many services the church has for parents like day camp and babysitting, that kind of thing. The first week we attended there was a twenty-minute sermon stressing the importance of cousinship in childhood. Not like ‘my cousin is my best friend, our childhood was magical because we had each other, John the Baptist was Jesus’ cousin' type stuff, but more like ‘what are you doing to make sure your children have cousins?’”

“What am I supposed to do with that?”

“I didn’t want to say anything about it to Stacy, because you know women don’t like to hear about their husbands noticing this kind of thing,” Ron Laywright told us, “But the first thing I noticed when we got there was that there was definitely… well I guess you’d say that a lot of the women there had a 'look' in common. I’m always trying to get my brother Terry more involved with faith and worship, so I asked him to come with us the next Sunday to see if he said anything. I figured he'd say something if anything seemed off.”

“With any community you’re going to have fashion trends. Things come and go. One season everyone’s wearing housecoats, the next everyone’s got to have chunky bracelets. It’s fun and it’s important that we care about how we present ourselves to the world. It’s just as important to try to dress in a way that brings joy and shows that we’re putting forth effort as it is to be modest and respectful in our clothing choices,” Stacy told us on the subject of importance of fashion in the faith community. “I just didn’t know what to think about how all the ladies there seemed to wear choker necklaces. You’d think it would be here and there, but they all had them. I almost think that’s how they knew I was new there.”

Aaaron’s brother Terry was more forthright with his observations.

At the time of publishing, the Laywrites informed us that they planned to explore other options for attending church services for the coming weekend. If pressed about their absence at the Ashbay Church, Stacy informed us it was her plan to cite the rising cost of gasoline and subsequently change her phone number and cell phone service provider.